Vintage Inns run a network of country pubs across the nation and launched a vegan menu last year. I have heard people raving about it so when my friend Samarra and I decided to go to dinner this week we The Mint in Banstead. Samarra is Muslim so a vegan menu also extends the options she is able to choose from.

The menu online looked quite extensive and I had pre-chosen the pasty to start and the pasta for main but unfortunately neither of these were on the menu when we arrived to the pub.

Instead I went for the soup of the day which was tomato and basil which was lovely. It came with bread and a wedge of something that looks suspiciously looked like butter so I left that to the side.

For my main I had the burger which unfortunately doesn’t come with chips as they use the same fryers for non-vegan items. The burger came in a ciabatta roll which did not appear for for purpose as the burger poked out on all sides! The patty was really nice though. The salad that came with it just seemed like extra burger toppings and not the roasted vegetable and grain salad on the menu so when the waitress asked if everything was ok with my meal I raised this and she got the kitchen to make up the correct side. 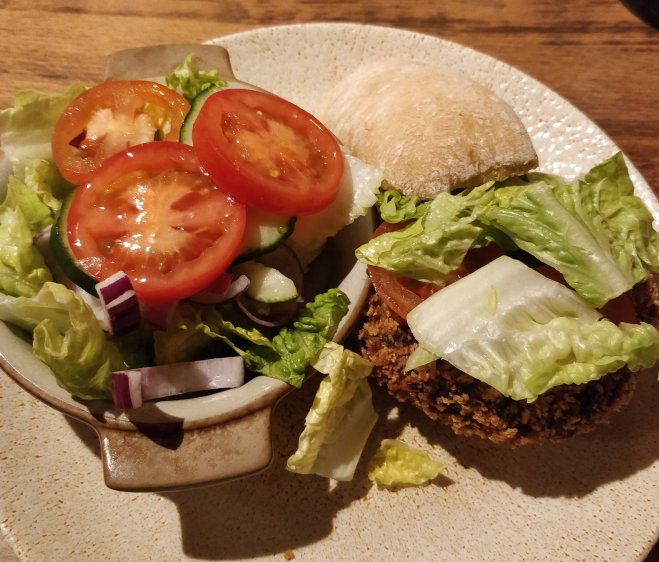 I didn’t want a dessert but decided to go for a hot drink while Samarra was tucking into her crumble but again, unfortunately, they do not have any plant milk options so I went for a peppermint tea.

It seems like Vintage Inns have gone to the effort to produce a vegan menu but the execution just isn’t there. I don’t know if this just The Mint of extends to their pubs. I do think it is really poor to offer a vegan menu but not having a separate vegan fryer or offer plant milk. I may try a different Vintage Inn in the future but I won’t be rushing to.

Have you eaten at Vintage Inns as a vegan? Did you have a better experience than me? Let me know in the comments below.