Last weekend saw 5,000 vegan and vegan curious people descend on the Newark Showground in Nottinghamshire. After a 4 hour drive from London (which should have been 2 and a half hours!) my Sister-in-law, Gemma and I queued for a little while to get in and then we set to work putting up the tent.

After we had successfully putting up the tent we headed over to the food area. Last year there were only four food stalls so I was glad to see the organisers had improved on this and there were 25 stalls serving food and drinks!

I chose a chickpea curry and rice and Gemma had a massive burger from Biff’s Jack Shack.

Gemma also picked up some churros which were a firm favourite with the crowd!

After having a little look around the stalls we headed to the main stage to hear a talk from Heather Mills. If you weren’t aware Heather is an activist and an entrepreneur owning the vegan food company VBites. Heather was really inspiring and it was great to hear about the work she was involved in.

We headed back to the tent after that for a cup of tea and an early night although it took quite a while to get to sleep.

On Saturday morning we headed over to the activism bootcamp building to watch a documentary called The Last Pig. I had heard the farmer who features in this film on The Main Street Vegan Podcast so I was excited to watch the documentary. I’d definitely recommend you check it out.

We headed back to the tent to have some breakfast on the camp stove. Although there is plenty of food available I would recommend you bring some of your own too.

The next talk was from Kerry McCarthy MP for Bristol East. It was interesting to hear how animal rights issues were being pursued in parliament and how an incremental approach is required in order to develop laws that protect and help improve conditions for animals.

There were some great stalls present. I picked up some information from Viva! and Gemma had her perfume bottles refilled from Eden Perfumes and also bought a cutlery set from vegan queens Bright Zine.

For dinner I had a jackfruit wrap and fries from Herbivorous. Gemma enjoyed a Caribbean meal with jerk soya pieces, rice and peas and vegetables.

We settled down into the evening talks. First up we saw Ingrid Newkirk, the founder of Peta. I was a little disappointed with her talk which just seemed to be her journey to veganism and didn’t touch upon the work that Peta does. She also didn’t hang around to receive any questions which every other speaker had, I think her talk was more appropriate for a non-vegan audience.

Next we watched the new film Dominion. Dominion was filmed in Australia and is a comprehensive breakdown on what every animal that is exploited on that continent goes through, from animals bred for food to wild animals and those used for entertainment. This was the most hard hitting vegan film I have seen and if you don’t have an emotional response to this film there is definitely something wrong with you!

After Dominion we saw a talk from Dr Melanie Joy. Melanie is a psychologist and the author of the book “Why we love dogs, eat pigs and wear cows”. Her talk was about communication between vegans and non-vegans as well as within the vegan community. It was really interesting and is the basis of her new book.

Last up on the main stage was comedian Simon Amstell. Simon is a fave of mine and I saw him perform about 10 years ago so I was looking forward to seeing him again at Camp Out. For most of the talks people were sitting on the floor or on their own camp chairs however the organisers asked that everyone stand in order to fit everybody in that wanted to see Simon’s set. He was great and had the whole audience in stitches.

There was a music stage as well with grime artist JME headlining on the Saturday night. We however decided to head back to the tent as it wasn’t really our thing.

On Sunday we planned to get up for morning yoga but unfortunately we slept through that! We packed up the tent and had a last mooch around. I bought an onion bhaji from veggies catering for the journey home and headed back to Herbivorous for some loaded fries for lunch. They had barbeque jackfruit, homemade beans and chipotle mayo and it was the best thing I had eaten all weekend.

I bumped into quite a few friends and fellow activists around the camp and we also made friends with Henrietta the pig! 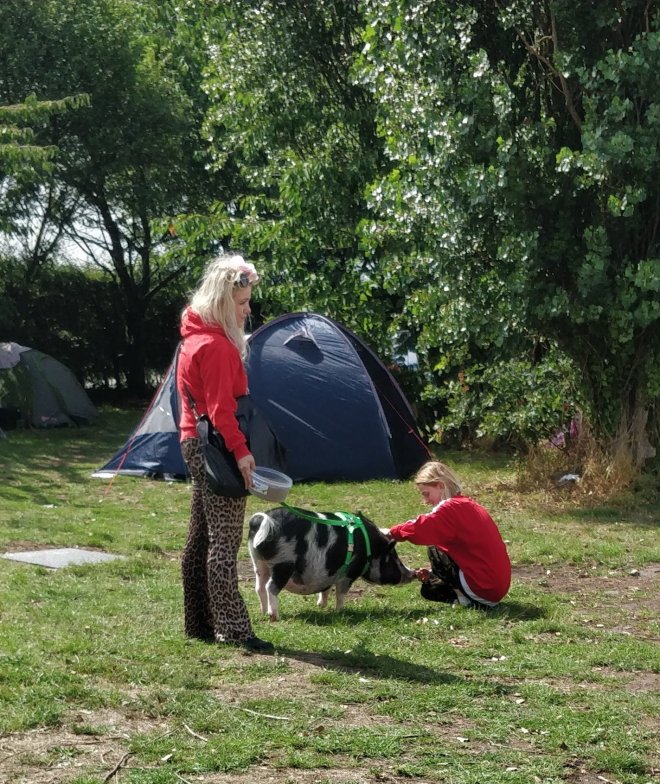 Overall we had a fabulous time. There were queues for the toilets but they went down quickly and they were all toilet blocks rather than portaloos. We tried to camp nearest the quiet camping area although you will always get a few loud obnoxious people. I’ve seen pictures of the camp afterwards and lots of people have commented how clear and tidy it was left compared to other festivals.

Tickets are already on sale for next year! So head over to https://www.vegancampout.co.uk to secure your place.

Did you make it to Camp Out this year? What were your favourite parts? Let me know in the comments below.