I had two days of Christmas company do’s in a row and after the abysmal display from Ipswich Town FC (basically just a plate of vegetables for both lunch and dinner) I knew things could only improve when we went to Bill’s in Shoreditch for our team Christmas meal.

I had pre-ordered the 3 vegan options for starter, main and dessert, no choice but better than some years where you have to ring up in order to negotiate a vegan option.

To drink I had a hot elderflower cordial. I’ve been suffering from a cold the past couple of weeks so this was really nice.

For my starter I had ordered mushroom soup, unfortunately mine and my colleague’s soup were both cold so they had to be sent back. Once they returned the soup was lovely tasting and the bread with it was great too.

For main I had the vegan roast, again the vegetables weren’t incredibly warm. I enquired about a vegetarian gravy and the waitress took so long I was almost finished by the time she came back. The roast was really moist and flavourful though and I think a lot of effort has been put into that. 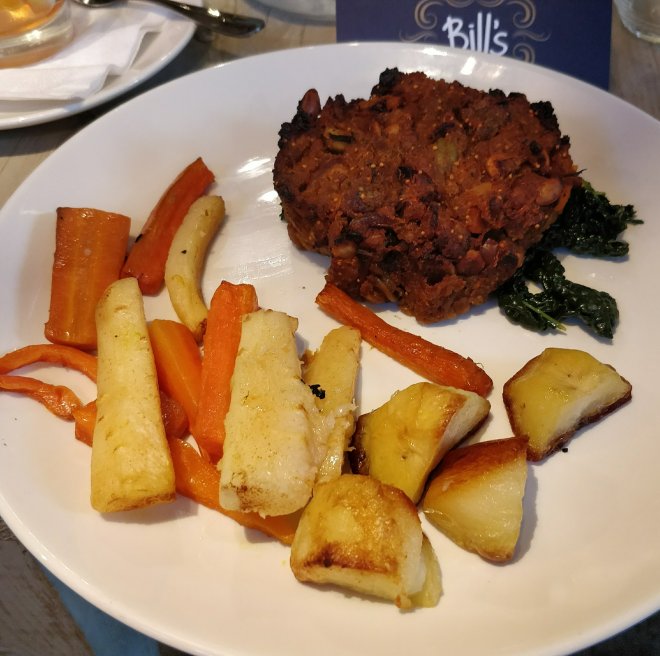 For dessert I had the rice pudding brulee. The sugar had a good crack but the rice was a bit claggy and didn’t have much sauce. Saying that I did manage to finish it.

I think this dinner looked really nice on paper but was decidedly average on eating. I’ve never eaten in a Bill’s before and this just may be the pressure of the Christmas period and all the work meals going on. It’s not the worse Christmas meal I’ve had as a vegan but no where near the best.

Have you been to Bill’s? What did you think? Let me know in the comments below.