My friend Jo and I went out for our monthly meal on Tuesday and this month we chose Vegan Yes a Korean Italian fusion restaurant located in the middle of Brick Lane. The menu is a quirky as it sounds, featuring both Italian and Korean dishes as well as some featuring both cuisines.

Jo went strictly Korean for her main choosing the bibimbap that featured all four the kimchis Vegan Yes had to offer. She found this simple dish very filling and I was happy to help her finish it. Each kimchi had a distinct flavour and was very fresh.

On the side she had a hemp hot dog, I also snuck a bite of this and it was really taste with a definite umami flavour. 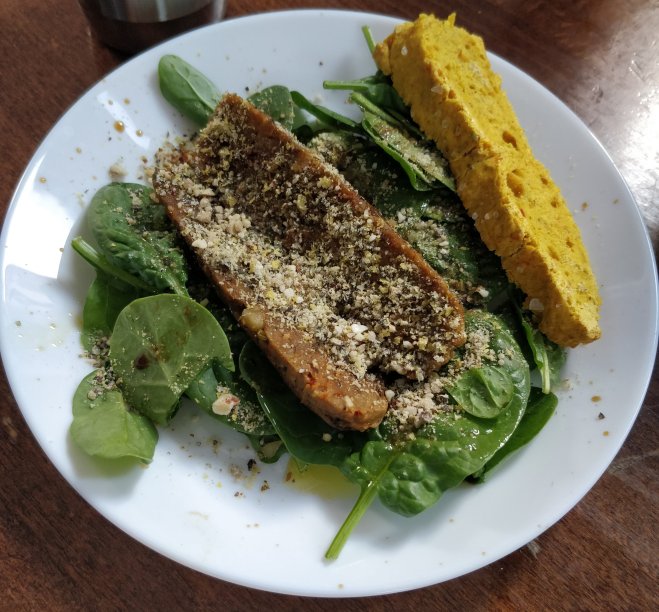 I had the Toppognocchi which featured Korean rice dumplings and Italian potato dumplings in a tomato and Korean spiced sauce with olive oil and sesame seeds. This was a fab dish and was surprisingly not too spicy for me. You could really taste the olive oil in the croutons too.

I had a gorgeous seaweed salad on the side to add a bit of greenery.

For dessert Jo chose the chocolate mousse, she said it had more of a pudding type texture than a mousse like one but it was tasty all the same and she finished the whole pot (I didn’t get a look in this time!) I chose the chocolate covered mochi. I’ve never had mochi with chocolate around it but it definitely won’t be the last time!

To drink with our dessert Jo had a ginger tea and a had a cold moringa with plant milk. We also had filtered water free of charge with our meal served in metal cups.

The restaurant is small with only two tables and then a bar with stools but I think you could fit quite a few people in there if you don’t mind it cosy!

The only disappointing thing I found was that it was cash only. I can’t believe in 2018 in central London you can get away with not accepting cards.

The meal was very reasonably priced coming in at around £13 each for us which isn’t too shoddy for a main, a side, a dessert and a drink each.

Would definitely recommend heading to Vegan Yes if you are in the area.

Have you been to Vegan Yes? What did you think? Let me know in the comments below.