I really enjoyed the market Sean (Fat Gay Vegan) put on at the Guildhall in the summer (which I wrote about here) that I had to go to the Christmas edition, especially when I saw the line up. 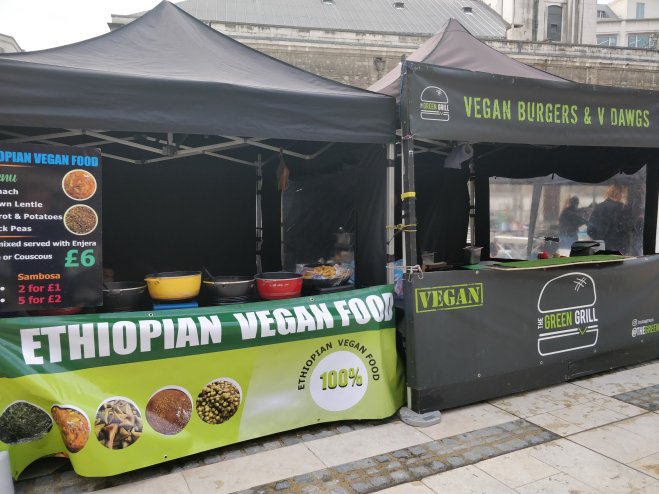 I hadn’t had breakfast so I headed down early to beat the queues. My first stop was Vausages. I had seen these folk at different events I had been to but this was my first time sampling their delights they had two Christmas hot dogs on, a Cumberland and an Apple and pork style. I went for the Cumberland which came with caramelized red onions and garlic mushrooms, I asked for it to be topped with their trademark blue garlic mayo.

Although it looks like toothpaste it actually tastes delicious! The bun was nice and soft and the sausage had a lovely flavour on the outside and I surprised to see it was filled with quinoa in the middle. I’ll definitely be heading back to them when I see them in the future.

Next stop had to be Vegan Delice. If you’ve read my posts from previous events you know I always stop by these peeps! I had to get my fave Viennese whirl as well as a peanut chocolate brookie for my Husband and I couldn’t be left out so I had to get a peanut butter and jam brownie for myself. Chanel was nice enough to let me try their raw cake which was a bit different.

After mains and dessert I had to have something to take home for later so I bought some cream cheese and lox from The Kinda Co I love their dairy free cheese and thought this one with marinated carrot (to taste similar to salmon) would be perfect on a cracker over the Christmas period.

I was pleased to see that FGV is bringing the market back to Guildhall in January and March although I am unfortunately unable to make the January date.

Its great to have a vegan market in the city especially so close to work. I would love to see this become a monthly (or even more frequent) event.

Do you work in the city? Would you welcome a lunchtime vegan market close to where you work?

Let me know in the comments below.

This week the organic supermarket Planet Organic held vegan markets at their various stores around London showcasing some of the products they sell with the opportunity to meet the product company owners and trying loads of samples!

I attended the market at Devonshire Square with my vegan pal Mitsu yesterday. 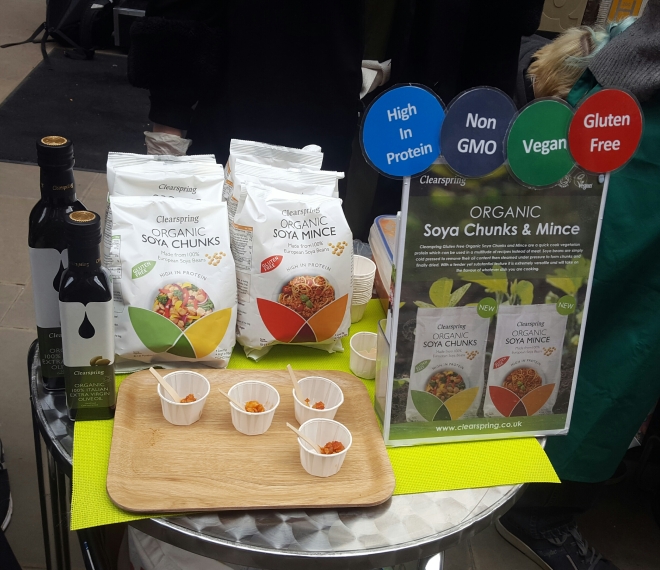 I have used clearspring products for a long time but I’ve never tried their soya mince/chunks. I’ve been reducing my processed soy consumption but for those once in a while times this looks like a good option as they use organic European soya beans.

I love the spiralina bounce balls and they’ve just had a revamp of their packaging. These are great as a snack or to have pre or post exercise. 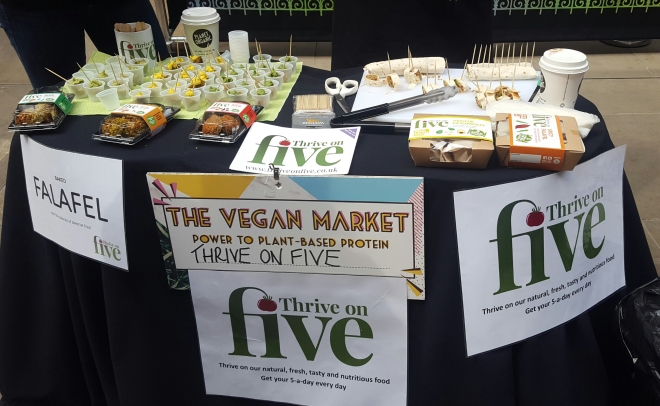 This was a company I haven’t heard of, they make falafel and wraps which contain 5 different vegetables. The falafel a are baked and come with a dip. 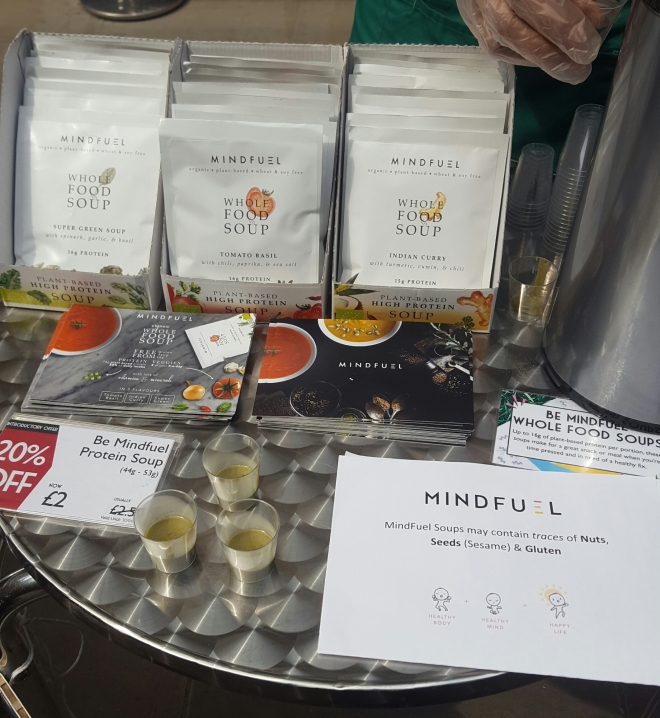 These Be Mindfuel soups are high in protein and are the thickest powdered soups I’ve ever come across. I like to make my own soup so I don’t think I would use these but they are great to have in your cupboard or drawer at work.

I’ve tried cheese from Nutcrafter Creamery before but I was really excited to try their new alternative to Halloumi that I had seen on their instagram feed. It didn’t disappoint! All their cheeses are cashew based and they also have a cashew based “butter”. 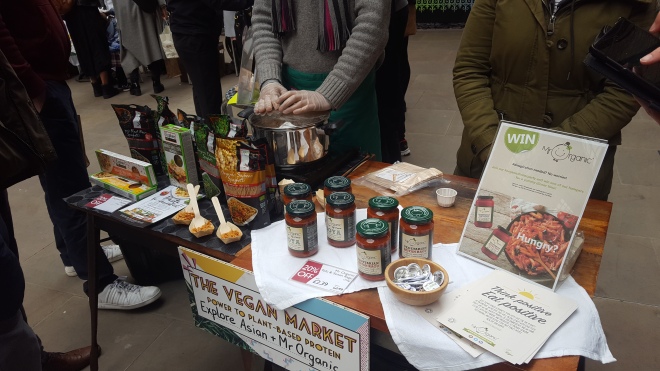 I’ve seen these pastas made with beans in various location but it was mainly the price that put me off. We tried the soya beans spaghetti in a tomato sauce and it was really filling. You definitely would need to put a lot with this so it like having a complete meal which definitely makes it more attractive to me. 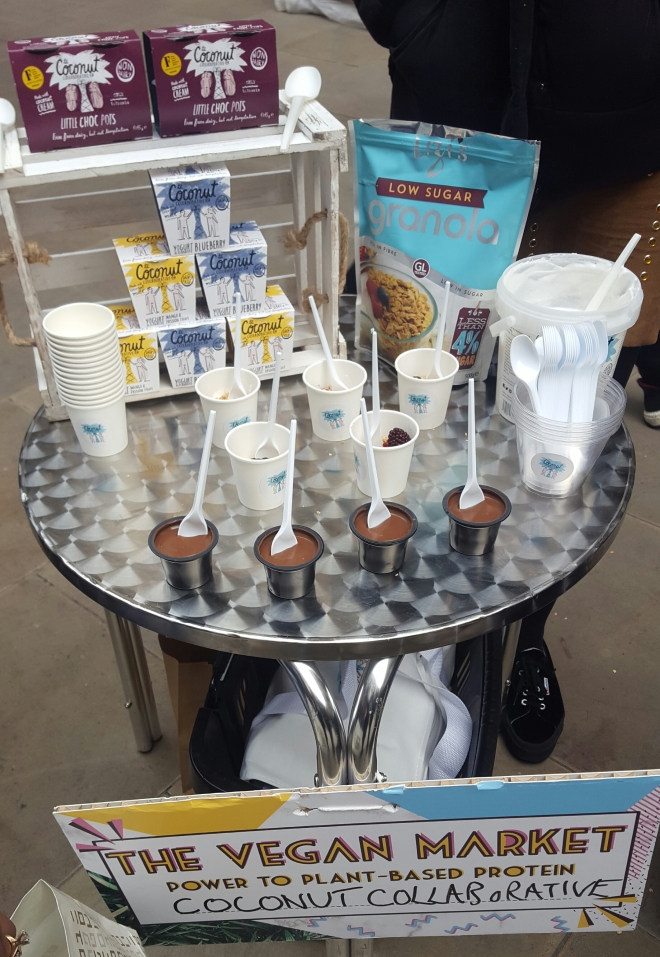 Coconut Collaborative make gorgeous yogurts, frozen yogurts and desserts. My Mum is a new convert to their little chocolate pots and they’ve just released some some little lemon pots which I’m really excited to try.

Lastly we have Themptation with their hemp based houmous and pesto. These were really tasty and an easy way to get some hemp into your diet with all those omega 3’s.

It was really great to see Planet Organic promoting these vegan products and suppliers. It’s so nice to meet the people that make these products and get a real sense of their ethos and trying before you buy is always good!

Have you tried any of these products? What are your favourites? Let me know in the comments below.