For Veganuary Pizza Hut offered a jackfruit pizza and said if they sold more than 10,000 it would become a permanent menu item. Well of course vegans took to the challenge and after a break for February the jackfruit pizza is back along with a new vegan starter, of jackfruit rolls and a dessert of cinnamon bites.

A great thing about Pizza Hut is the salad bar! (Although I don’t think it’s as good as Harvester’s one). So fill up on veg to give yourself a healthy glow and to counteract the cheesy, doughyness to come!

My Husband and I both had a jackfruit pizza which came with a decent amount of Violife cheese which wasn’t the case on my previous visit. The pizza comes with jackfruit, red onion, sweetcorn and peppers. We both thought the jackfruit got lost a bit in the mix and could have done with one else topping (Husband would lose the sweetcorn and I would lose the peppers).

We also tried the jackfruit rolls. As you can see from the photo these were a bit overdone. The jackfruit was in a sweet chilli sauce which tasted a bit odd to me and I don’t think I would get these again. 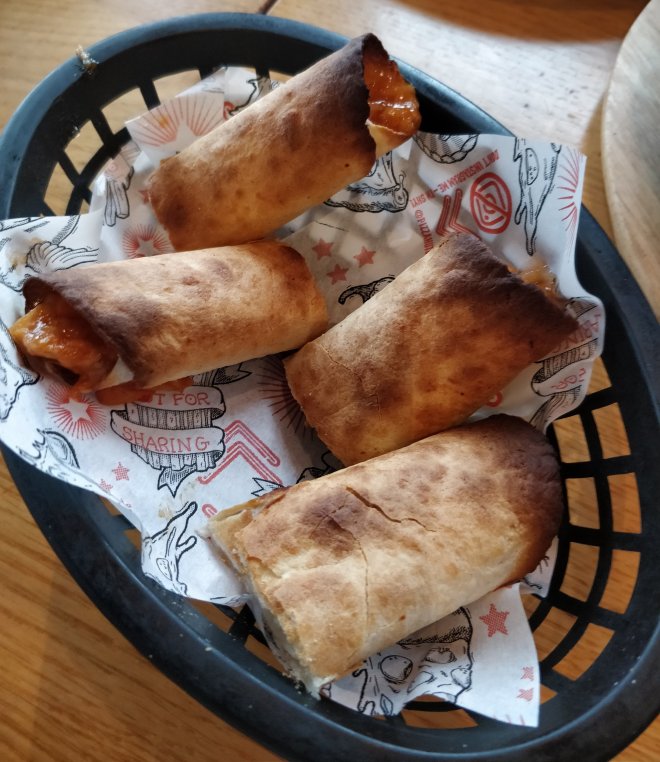 Although Pizza Hut are great for providing more vegan options there is still no dairy-free milk for your tea or coffee. I also don’t think it would be too hard to have a tub of Swedish Glace in the freezer so we could enjoy a float of a scoop with dessert.

Have you been to Pizza Hut recently? What did you think? Let me know in the comments below.

I had some loaded fries at the Vegan Camp Out which were out of this world so I decided to make mine own as a had a tin of jackfruit knocking about.

To start I drained the jackfruit (which you can buy from Asian supermarkets, make sure you get it in brine/water, not syrup!) and the ln broke it up into shred with my fingers. Some recipes say remove the cores but I leave them in. 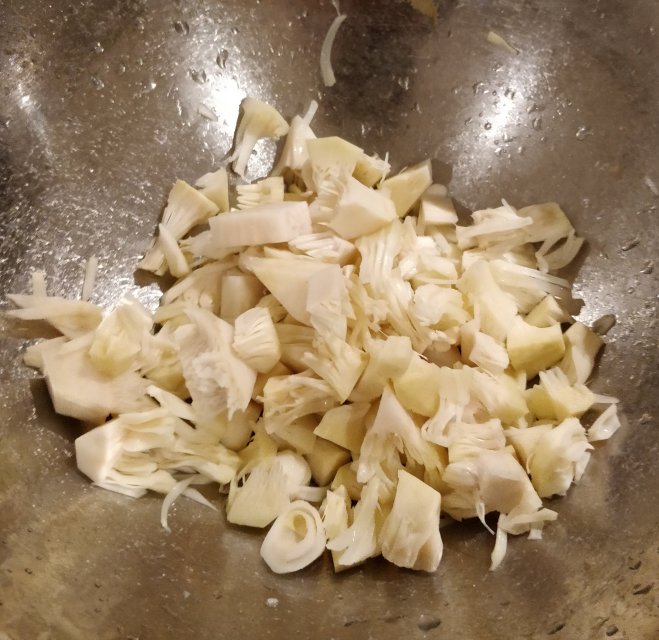 Next I sprinkled over jerk seasoning to give it a good covering and mixed with my hands. 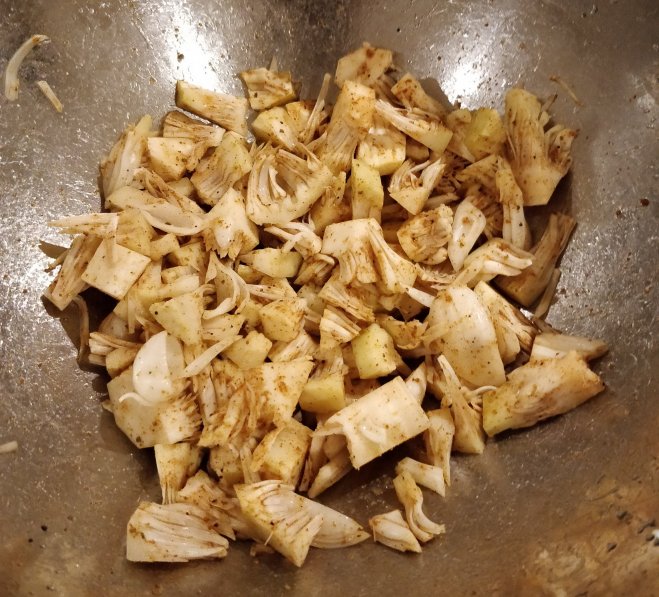 Then I covered in a barbeque sauce marinade, there were only two available at my local supermarket and one had honey in so I went with the other. Pour it on and give it a good covering.

I then left it to marinate overnight.

The next day I spread it in a baking tin and cooked it for 40 minutes stirring once, half way through.

I cooked my fries in the oven and served it with beans and violife cheese. I would had added on some vegan mayo mixed with sweetcorn but I couldn’t get hold of any mayo.

Pretty simple! What are you favourite toppings for fries? Let me know in the comments below.

I have visited the Gallery Cafe in Bethnal Green quite a few times and have blogged about it in the past but this was my first visit since they decided to go fully vegan at the beginning of 2018.

The Gallery Cafe is situated in St Margaret’s House, a charity supporting the local community and with 100% of the profits going back to the charity you not only get a tasty meal but a warm fuzzy feeling too!

My Mum and I were going to a gig in Bethnal Green so it was the perfect excuse to visit.

My Mum had never tried jackfruit before and wanted to sample some so she went for the tacos which are described as “Pulled jackfruit slow-cooked in our homemade smoky barbeque sauce in soft shell corn tacos; served with a crunchy red onion, carrot and cabbage slaw and a tangy lime, ginger, garlic and chilli ceviche; topped with fresh coriander”

She was rather taken by the blue corn taco and described the dish as “lush”! 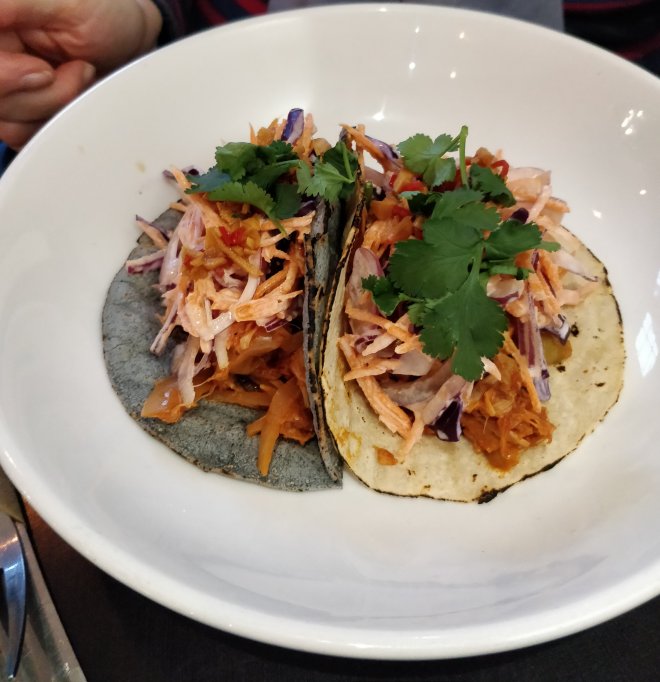 I was toing and froing between the sweet potato masala and the gado gado chao with the latter winning out. It is described on the menu as “Our unique Indonesian mixed-vegetable stir-fry with a punchy peanut and lime sauce; served with tempeh, brown rice and fresh coriander“. The sauce definitely did pack a punch and the tempeh was so tasty. It really hit the spot on this freezing cold day and the vegetables were perfectly cooked. 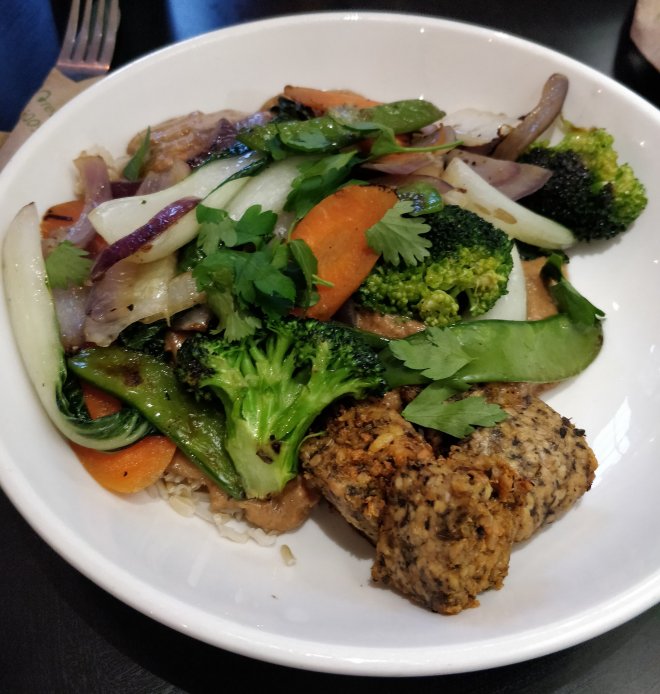 I’m excited to go back to the Gallery Cafe to try out some more of their dishes.

Have you visited the Gallery Cafe recently? What did you think? Let me know in the comments below.