Yesterday I attended the protest against the Greyhound Board of Great Britain Awards at The Brewery in Chiswell Street organised by Caged NW (Campaign Against Greyhound Exploitation and Death), London with my Sister-in-law, which was my first protest of 2017.

If you are unaware of the animal abuse issues involved in greyhound racing I’ll let you Google that for yourself.

We stood in the pouring rain making our opinion heard and I’m sure those arriving in black tie definitely heard what we had to say!

We didn’t stay as long as we had planned but we stayed until we were soaked through to the skin and were freezing. My Sister-in-law is still on antibiotics for a chest infection so we thought it best to leave.

We received support from lots of bus, taxi and car drivers going past and the police presence were quite friendly too.

Here’s some photos of the few hundred people who attended and gave their voices for the greyhounds. 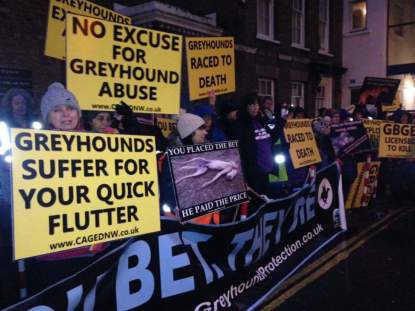 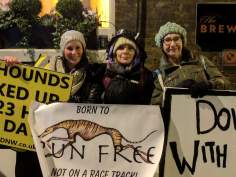