On Thursday my Husband and I attended Vegan Peasant Catering supperclub at The Grand Howl vegetarian cafe in Hackney.

The cafe’s windows were steamed up and they had their shutter half down so we walked past it before we realised that was the place.

When we arrived we were offered a glass of Prosecco which went down very well and soon the canapés were coming out.

The aubergine was definitely my favourite which wasn’t a surprise and I am a huge fan of ghanoush. I hate grapefruit with a passion but the it was only a sliver and added a nice citrus burst which cut through the rich cream cheese. The ricotta was pleasant but I don’t remember tasting any fennel.

The dishes were placed on the counter and it felt like a bun fight to get in a grab one, not always being successful and having to wait for the next tray.

Next to come out were the bowls.

The gnocchi was divine with gorgeous tomatoes and mushrooms. I had big leaves of basil which just added to the gorgeousness. 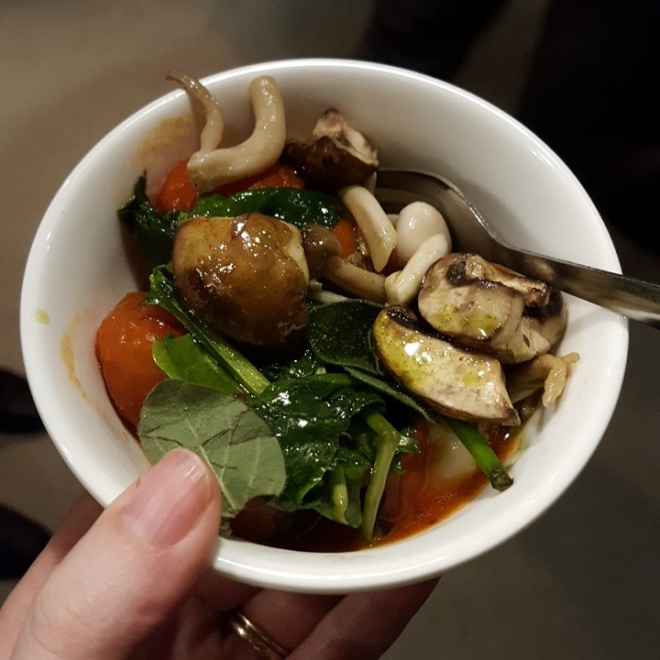 The other bowl was my fave dish of the evening. Roasted veg with a sinus clearing horseradish sauce, what’s not to like!

The desserts were bite size like the canapés and I think I could have done with a bowl size portion! The buttery biscuit with cream and fruit was lovely although I think the cream could have had a bit more flavour. The fudgey brownie squares were rich and intense.

This event was like a reception I would say, in that it was standing. This was the aspect of the evening that I found least enjoyable. We were there about 2 and a half hours and my Husband and I ended up leaning against the wall. It was also very warm and I had to step outside for a bit to cool down.

The meal was good value for money at £25 including the Prosecco and I left feeling satisfied without overly full.

We also got chatting to another who works close to me so we’re going explore our working area for vegan lunch options.

Vegan Peasant said they are starting monthly events with the next one at the end of March. I think this standing style isn’t for me and I would only go to a sit down event.

Have you been to a Vegan Peasant event? What did you think? Let me know in the comments.