Can’t believe it’s September! Autumn is my favourite season, I think due in part to it being when I met and married my Husband. I’m looking forward to lots of stuffed squashes and stews in the coming months!

I haven’t been feeling too well this week but I’ve still had some great food.

On Monday we had a simple stir fry which has become a weekly staple in my house, I think it’s an easy way to get a decent amount of veg!

On Tuesday I was very ill and had to come home from work, I managed some plain spaghetti for dinner. On Wednesday I stayed at home and had some salad for lunch. My Mum made me dinner and it was stir fry again, this time with some tofu from the Asian supermarket.

On Thursday I was still after simple food so had gnocchi with a dairy free pesto, this was ready in under 10 mins and was really tasty! 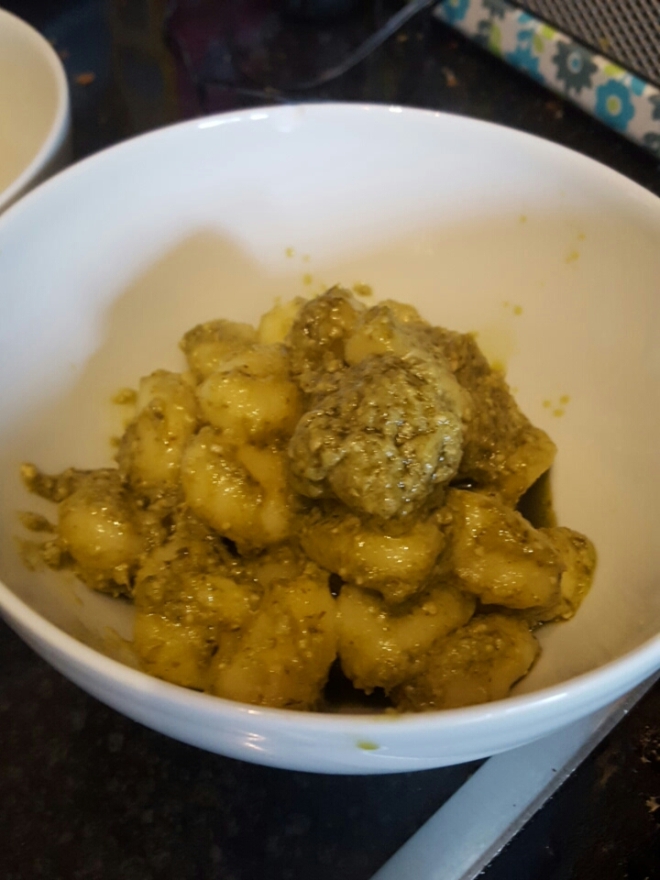 On Friday I was up for something more adventurous but still tired so we decided to get a takeaway. I had aubergine with potatoes, chickpea masala and lentils with spinach. I love getting a few vegetable dishes and this lasted me for dinner on Saturday as well and tea on Sunday! 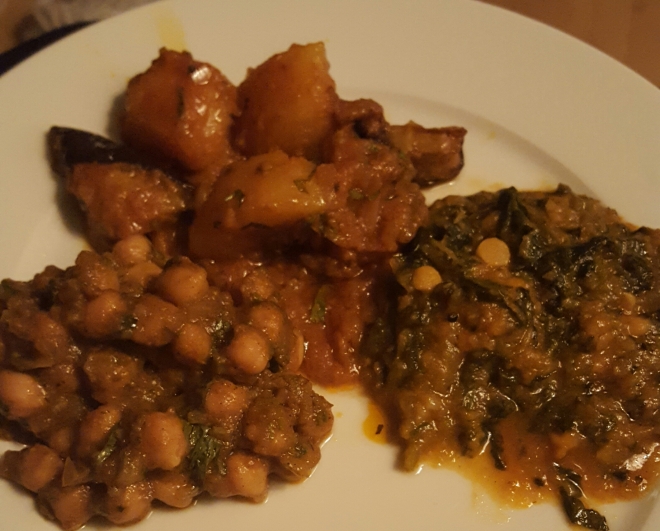 On Saturday I went to Primrose Hill in London for Pup Aid a charity dog show against puppy farming. I also helped on  the SaveABulls stall, a campaign set up by Sister-in-law and her veterinary nurse colleagues against the Breed Specific Legislation aspects of the Dangerous Dogs Act (1991) which I wrote about previously here. We had a great day, I saw loads of lovely dogs, did a bit of celeb spotting (!) and spoke to lots of people about Breed Specific Legislation. We had three exempted dogs who had been deemed pit bull “types” on the stand, giving a great example of how lovable and friendly these dogs can be.

My Brother and I went to the top of the hill and had a lovely look down at the event and across the London skyline.

We took a break and walked down the canal to Camden for lunch. I stopped at Club Mexicana at Kerb food market. I’ve tried their jackfruit burrito before so I went for their to-fish tacos which were lush. I thought they might be a bit messy to eat but I managed it quite well!

Hopefully I’ll continue to recover this week and get a bit more energy!

I meant to publish this a couple of weeks ago but due to technical difficulties I lost half the post and have only just got round to re-writing it.

The Dangerous Dogs Act (1991) was enacted in the UK in order to reduce dog bite injuries. The act has not had the desired effect and dogs bites have been on the rise since it came into force. On top of this innocent dogs that have no history of aggression continue to be seized and destroyed due to the criteria under Section 1 of the act.

Section 1 states that four dog breeds are banned in the UK. The most relevant one is the pit bull terrier. In the UK this is a mixed breed so it is difficult to determine whether a dog fits into this category. A set of measurements are used to determine whether a dog is “type”. Again a dog can be seized and assessed when it has no history of aggressive behaviour. The dog must have 60% of the criteria to be classed as type. This often leads to some dogs from the same litter being classed as pit bulls and others not.

These cases of innocent dogs take a lot of time for the courts, costs to the police (and therefore the taxpayer) and heartache for the owners who cannot see or even know where there dog is being held once it has been seized, often for many months.

If a dog is classed at type it can be exempted if the courts believe it poses no danger to the public. The dog must be microchipped  (as all dogs must be in the UK from April 2016), insured against 3rd party injury, kept on a lead and muzzled in public. Dog and owner must live at the same address for all but 30 days a year and if this 30 day rule is breached the dog may be destroyed. Dogs cannot also not be rehomed if the owner can no longer keep them due to issues such as housing. Ownership can only be transferred if the owner has died or is terminally ill.

This is a complex law that is ineffective and needs to be amended or repealed. Education is key to reduce dog bites and ensures owners are responsible for their dogs especially around children.

I first learnt about the issues with the Dangerous Dogs Act through my Sister-in-law who is a veterinary nurse who works in the charity sector. Along with two other nurses they set up The SaveABulls  campaign to challenge this law and give a perspective from the veterinary profession. From their Facebook page – 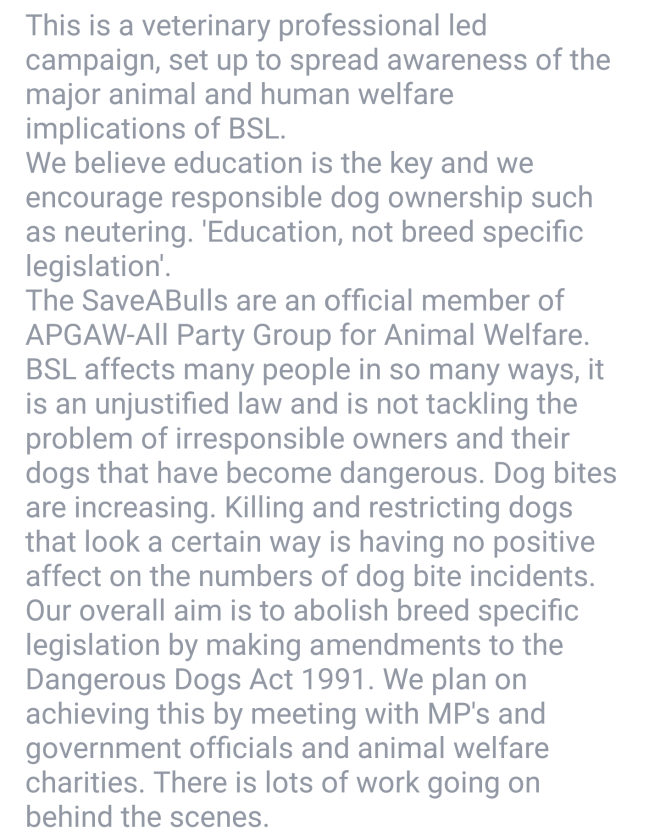 There are many other groups who campaign to repeal this outdated law.

The singer Professor Green recently presented a documentary on the Dangerous Dogs Act for the BBC which can be viewed in the UK here until the end of 2016.

The protest in July was reported on dogworld.co.uk and dog news.co.uk. There were also protests in other countries protesting their own breed specific laws.

As well as protesting the law we were also there to remember the dogs that had suffered and been put to death under the legislation.

If you are interested in furthering the cause I suggest you visit the campaign groups’ pages to see any events that are going on in your area. Through these sites there are also links to petitions and templates to contact your local MP. 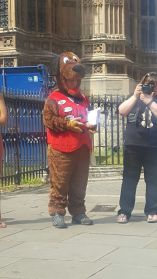 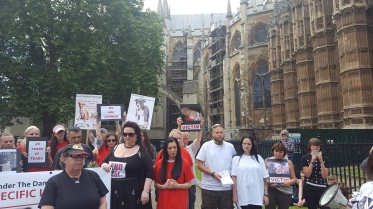 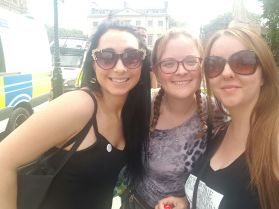