Veganuary is very food post heavy due to all the new products and menus coming out but it’s also important to highlight the vegan/animal rights activism that is taking place.

On Friday Havering Vegan Action (of which I am part of the admin team) took part in our regular Earthlings Experience event where we show footage from UK farms and slaughterhouses and start conversations with members of the public who stop to watch. We had some productive conversations with many people taking away more information to look into.

On Saturday I took part in the No Whaling March to The Japanese Embassy. Japan have decided to exit the IWC agreement and start commercial whaling again after originally signing the agreement in 1982. You can sign the petition to ask the Japanese Government to reconsider this here. 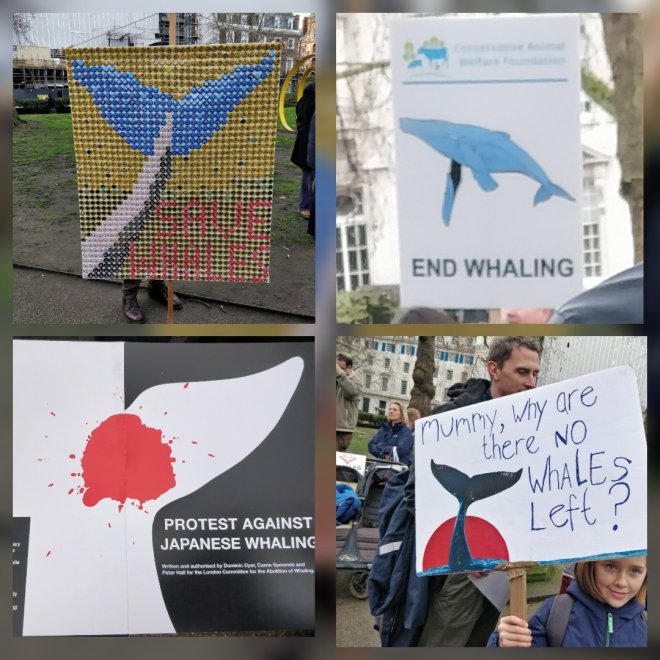 On Sunday I took part in the CAGED NW (Campaign Against Greyhound Exploitation and Death Nationwide) protest against the GBGB (Greyhound Board of Great Britain) Annual Awards Ceremony at the Park Plaza Hotel at Westminster.

I was charged with handing out leaflets to the public (so I still have my voice!) many of people I spoke to were anti-racing and supported the protest, others were tourists who were interested in the issue as it was something they weren’t aware of. I also spoke to some of the residents who lived opposite the hotel. I encouraged them to ask the hotel to not host these awards I’m future if they were bothered by the noise of the protest.

There were other events this weekend that I couldn’t make it to, there is so much going on!

If you’re a new vegan (or not) and you would like to get more involved in activism look on Facebook for events taking place in your area. If you have any questions reach out to the organisers and they will happily put your mind at ease.

Let me know what activism you have been getting up to in the comments below.