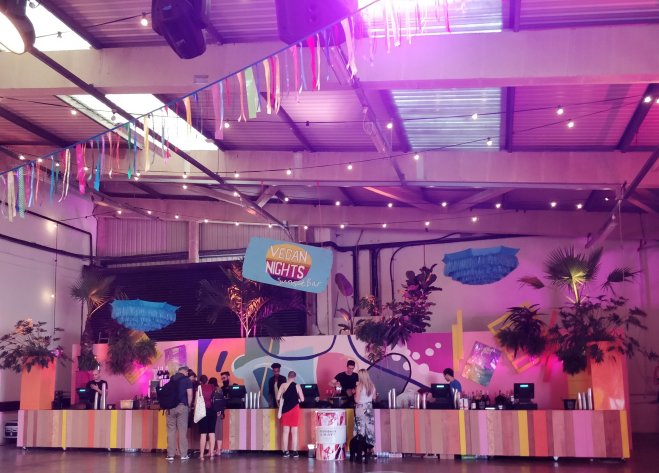 Vegan Nights takes part in the first Thursday of the month at 93 Feet East on Brick Lane and August’s theme was carnival.

As Brick Lane is a short walk from work I always get there early and this time I met up with my friend Maxine and her friend Antonia who was attending her first vegan event!

I was a bit miffed when I arrived as I was made to empty my water bottle. In these high heats when we are encouraged to carry water to keep hydrated especially while travelling it is a shame Vegan Nights has this policy. It is especially mad when the first thing we did once entering was go to the bar and get a large glass of free tap water!

As always we did a tour of the stalls before deciding what to eat. There are always new stalls that I haven’t seen before and new foods to try! 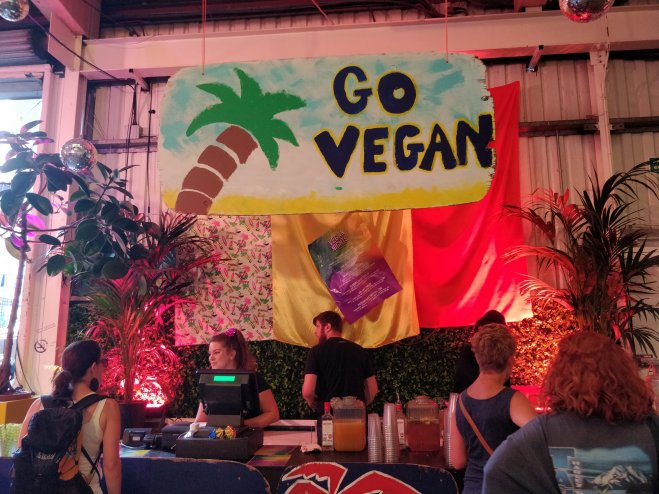 For my main I decided to go for wings n tings from Italfresh a Caribbean stall. It consisted of cauliflower “wings” in a ginger beer batter with slaw and sweet potato fries. The thick batter was really tasty and feels a little virtuous by also have a good portion of cauliflower!

Antonia also went for Caribbean from another stall, she had jerk chickn bites with plantain, salsa and slaw. This was Antonia’s first time trying plantain and she was completely sold! 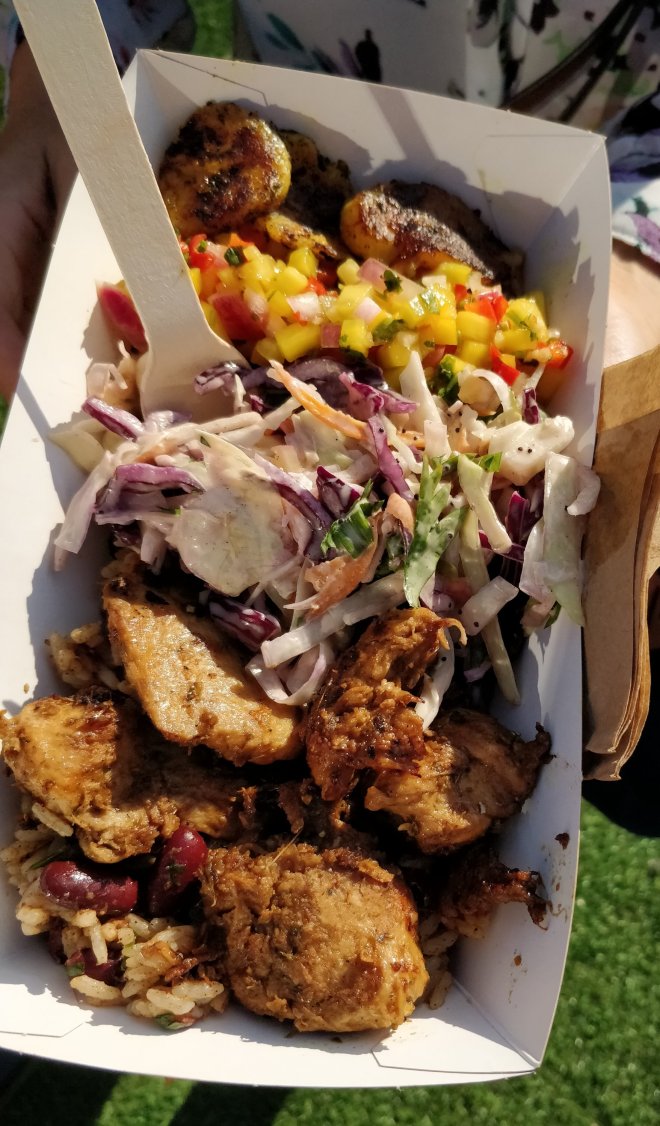 This burger looked immense and Maxine got quite messy trying to eat it! 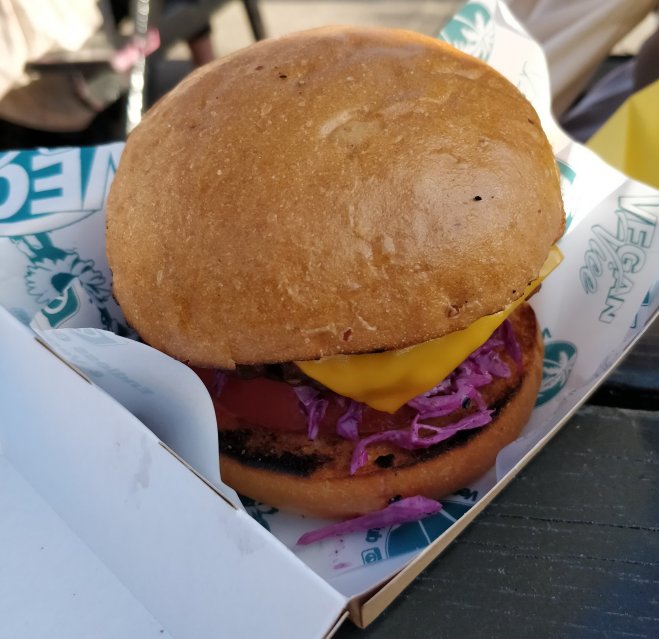 We wanted something refreshing and cool and the temperature was still hot hot hot as we went into the evening. I chose a smoothie from Love Shack which had coconut milk, pineapple and ginger.

Maxine and Antonia were tempted by the coconut ice-cream served by Elly Joy and it was easy to see why! 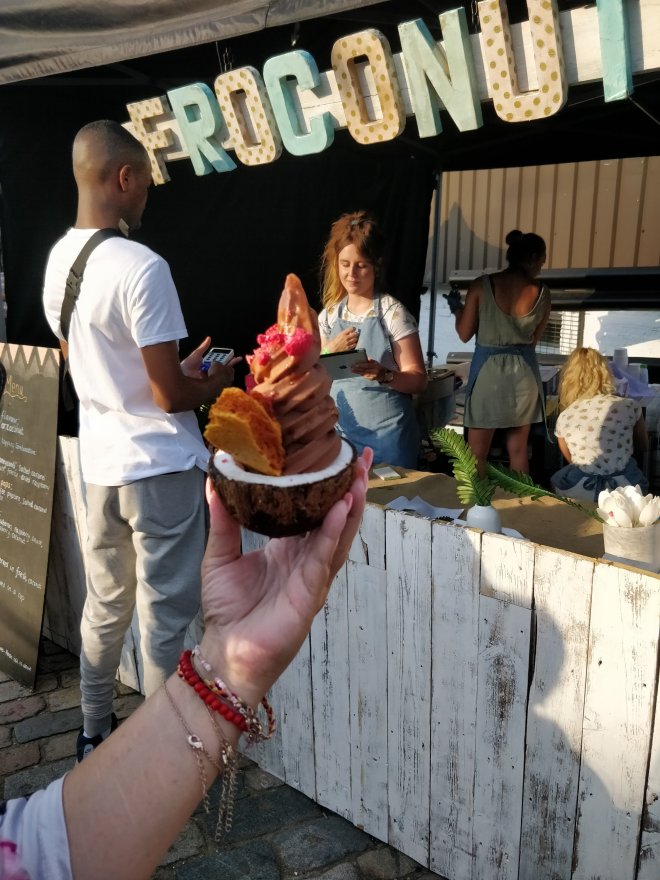 I couldn’t go out and not pick up something for my Husband. I got him a peanut butter and jelly brownie from Vida Bakery. 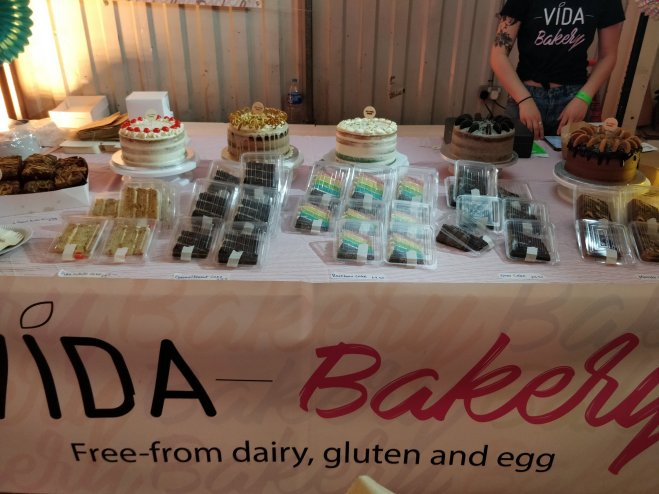 As the evening goes on it gets busier and busier and the queue when I left was getting quite long. I usually make a speedy exit as by Thursday I’m tired from the week at work and this week I’m also suffering from a sore throat coldy thing.