Previously if I went to M&S to get my lunch it would be a couple of their mix and match salads, a large samosa or some of their mezze selection although none of these options are ideal.

But now they have revamped their lunch offerings and have two (count them, two!) vegan sandwiches along with some tasty looking large nourish bowls and a range of sides.

I first tried the Super Greens sandwich a couple of weeks ago. It contains a minted edamame and pea crush on soft linseed and chia bread. This sandwich was really tasty and I’m suckered for minted peas but I felt it could have done with a bit more filling. As it’s got the calories clearly marked on the pack I assume they were trying to get it under a certain amount!

A couple of days later I tried the other sandwich, the Rainbow Veg. This had avocado, roasted veg and chilli squash on a soft red pepper bread. The filling was really tasty and there were a few different veg in there. The bread was also really different and not something ive really seen before. I have a low heat tolerance so the chilli was a bit hot for me but I think if I had a drink close by it would have been better for me!

Today I was a bit more adventurous and went for the meal deal. I got the edamame and black rice nourish bowl, which was ah-maze-ing! I love Japanese food and this definitely had a Japanese twist. The edamame bites are like an Asian falafel, then there’s the edamame beans with wakame seaweed – I love seaweed in all its forms so this makes me very happy! The beetroot and the black rice both have a lovely pickled flavour and the soy and chilli cashew dip is divine (and not too hot for me!) 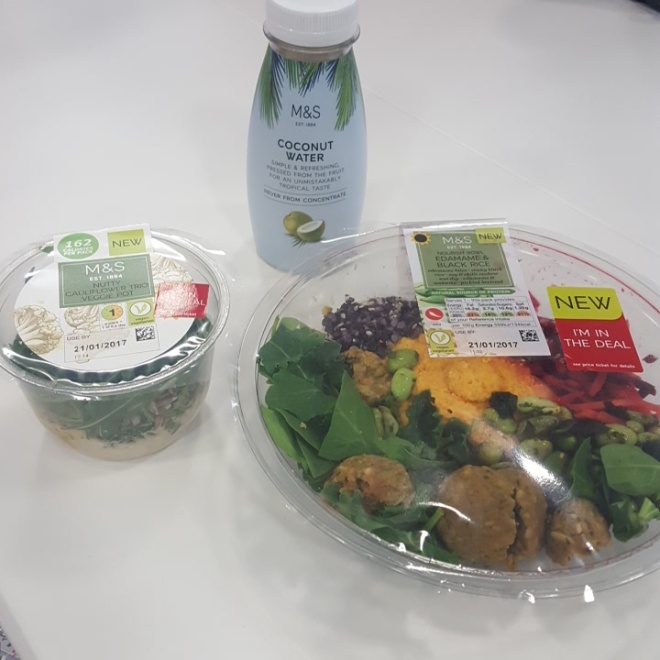 For my side I chose the nutty cauliflower trio veg pot which contained spiced cauliflower, pickled cauliflower and a cauliflower and cashew dip with seeds and a few leaves. This was a lovely well thought out side and much more interesting than a bag of crisps or some carrot sticks and houmous!

I went for a coconut water for my drink as I thought I would get be getting a good deal as usually they are quite expensive. This meal deal was £5 but I think this was because I was in London/a train station. I think they are usually £4.

Sarah from The V Nice Life has tried more of the range which you can see in her Taste Test Video.

Have you tried any of the new range? What did you think? Let me know in the comments.