I’ve been a bit quiet this week blog-wise. I have a few things in the pipeline for next week so watch this space!

On Monday I made a stir-fry. I had some tinned red bean curd which I bought in Brighton a few months ago which I’ve never tried before. Unfortunately I still haven’t tried it as when I opened the tin it had all broken up and was floating in the liquid, it obviously didn’t like travelling in my backpack! Luckily I had some frozen soya beans which I could sub in. I used a stir fry veg pack from Sainsburys with fresh Singapore noodles and some ginger and teriyaki sauce. Really quick to make after my evening run. 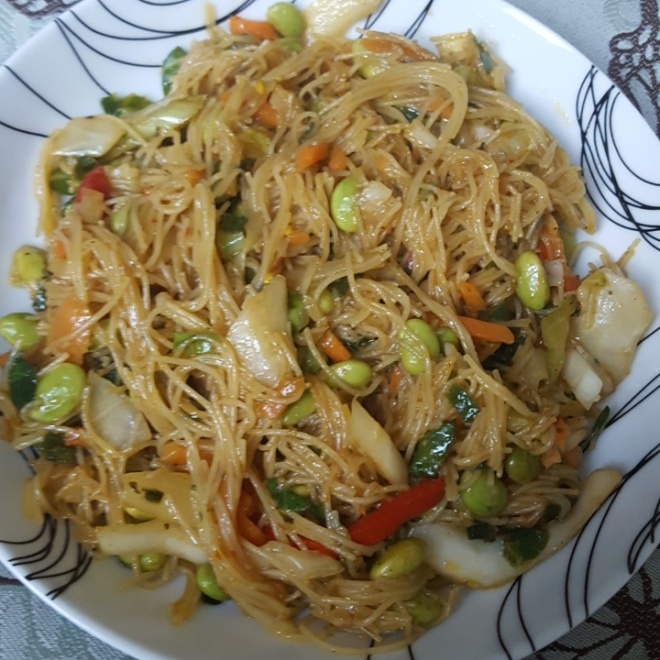 On the way home from work on Tuesday I picked up a couple of new chocolate bars from Marks and Spencer’s “Made without Dairy” range. I had heard about them online but couldn’t locate them in my local store. The M&S twitter people told me there were stocked so I should ask a member of staff. I managed to find them, I was looking around the chocolate area but they were in a free from area which mainly had wheat free pasta, bread etc and they were on the highest shelf so they weren’t immediately obvious to my 5’4″ self! There were 3 available, a plain dark chocolate one, dark chocolate with mint and dark chocolate with orange. I thought I would prefer the mint one but the orange one was my favourite. I do prefer dark chocolate but as these were in a “made without dairy” range I did expect them to contain a dairy alternative such as rice milk. Still it is nice to have another option on the high street.

For dinner we had falafel and houmous wraps with salad. Another quick and easy dinner and it tasted great!

On Wednesday I went swimming with my Mum and she made spinach dhal from A Vegan Taste of India which I bought her partner for Christmas, served with rice and paratha. This was a lovely wholesome meal after swimming.

My Mum had also been to the local Asian supermarket and picked me up some mochi (after she had read about my disappointment here). These were made with mung bean paste instead of the usual red bean one and were really tasty. Like always I ate them too quickly, I really need to learn to ration myself! 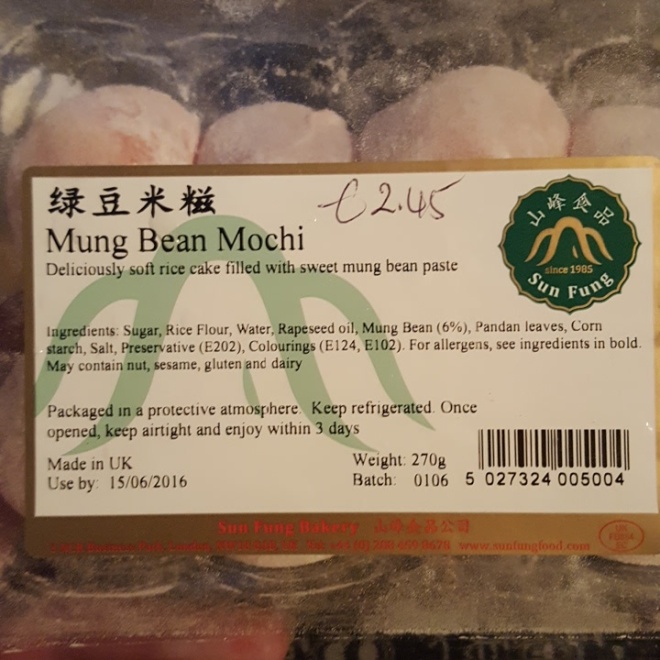 On Thursday my Husband made us a lovely chilli to have in some of the wraps we had left over from Tuesday. I didn’t take a picture as you couldn’t really see anything when they were done!

I was excited to see Tesco had added another vegan sandwich option to their lunch range. Unfortunately I was quite  disappointed after I had eaten it. This houmous and veg bagel thin had a scraping of houmous, as if it were butter and the veg didn’t taste of much. I’m also not sure why it needed to be a bagel thin, what’s wrong with a full bagel? Lastly this was cheaper than some of the sandwiches in the meal deal (sandwich, drink and a snack for £3.00) but wasn’t included in it. I definitely won’t be buying it again. 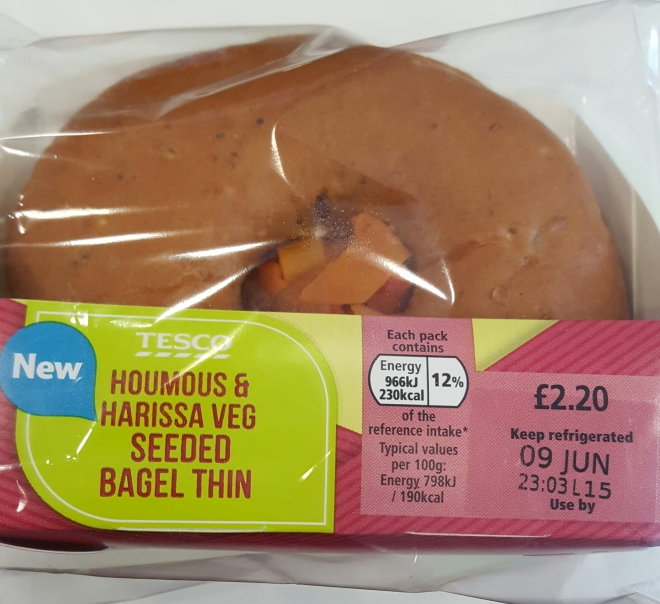 I had bought some new potatoes which I needed to use up as they were starting to sprout eyes so I decided to make a potato salad using an avocado, spring onions and some black beans we had left over from the chilli. I really love using avocados in a dressing or as a pasta sauce. 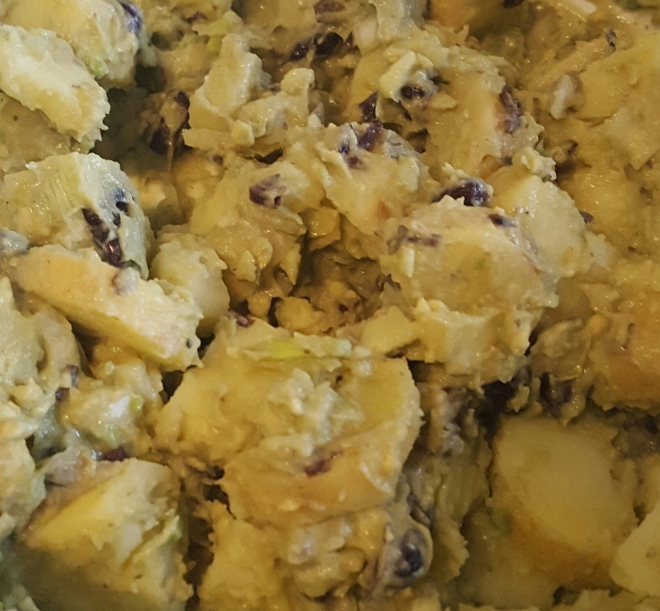 Yesterday I used up some bits and pieces, I still had a lorne sausage in the freezer from my More Than Meat review and I sprayed the left over new potatoes with oil and baked them in the oven. I had some mushrooms that were on the turn so I fried them with ropey spring onions and my freezer failsafe peas! 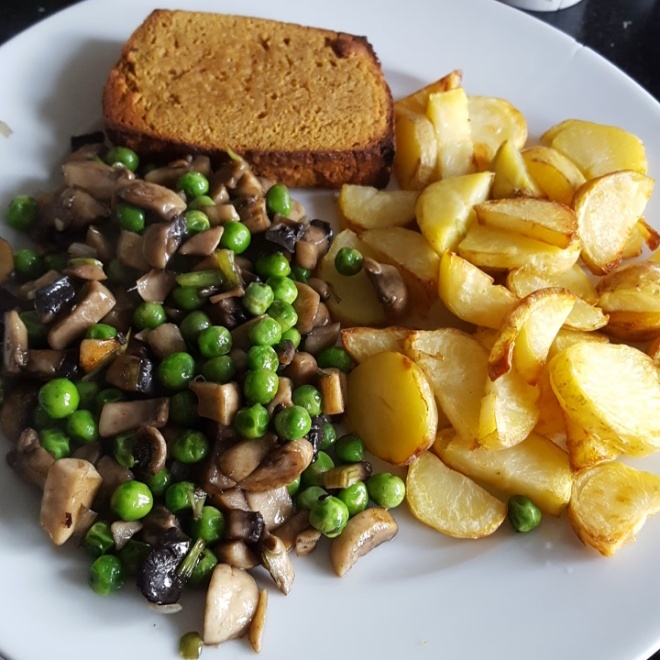 Today my Husband was planning on making doughnuts, but we hadn’t read all the way through the recipe and didn’t realise as it was a wetter cake like batter we would need a doughnut tin. We weren’t able to find one locally so the doughnuts will have to wait until the Amazon delivery!

For dinner I made jerk tofu (my Husband had jerk pork), it’s really easy just to mix jerk seasoning with oil and add some garlic to make a marinade. I served it with rice and peas and some garden peas and onions to add some more veg. We made a big batch so we can have the same again for dinner tomorrow!

While we were in Sainsburys not buying doughnut ingredients I picked up these dairy free iced desserts (so annoying their not allowed to just call it ice cream!) I had seen the chocolate one posted on Twitter a couple of weeks and I’m glad that both that and the strawberry one have made it to my store. I think Sainsburys is still way behind Tesco in terms of vegan offerings but I was really impressed today to see they had vanilla and chocolate Swedish Glace as well as the strawberry chocolate covered lollies, 3 flavours of Coco Collaborative and these new own brand delights as well as their sorbets available. The strawberry was sweet and creamy but I think there could be a stronger strawberry flavour. The chocolate was the real star! Thick and creamy with a rich flavour. These are both made with coconut milk and are £3 each which I think is pretty reasonable.

Have you tried any new vegan products this week? It seems like there are more and more everyday!