Hey folks, as you may have seen I’ve had a busy week of blogging this week. Some weeks you just have a lot going on and a lot to talk about! I’ve felt really positive this week and I think that coincides with my 4th veganniversary which I wrote about here. I’ve been in a rather reflective mood, so let’s reflect on the week’s food!

on Monday I was scavenging in the fridge and had lots of bits and pieces so I decided to make roasted vegetables with potato and chickpeas, I tossed the veg and chickpeas in oil and herbs, I cooked the potato in the microwave for a bit before tossing it in as well and baked in the oven for 30 mins. Really easy and really tasty. I love roasted chickpeas, I roasted the other half a tin and had them in a salad for lunch later in the week. 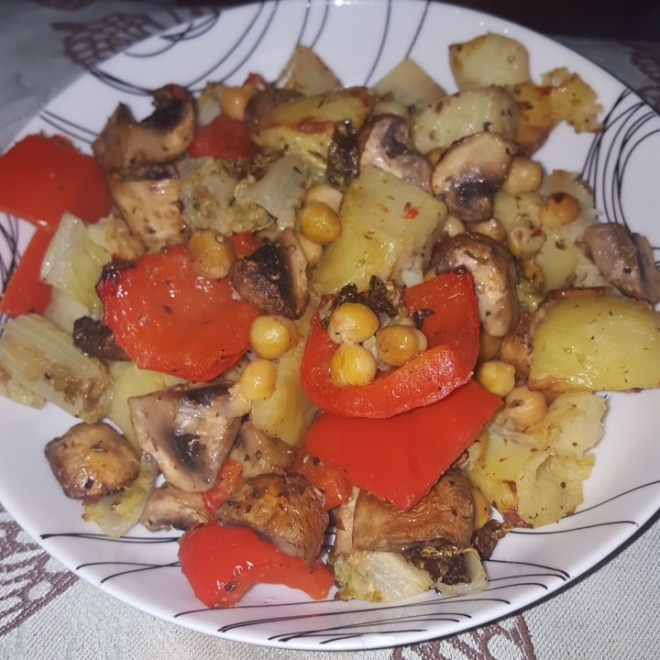 Tuesday I grabbed some pea and mint soup from Pret (you can read my review of Pret’s new vegan options here). It tasted really fresh and was so filling I also liked that there were quite a few whole peas to give it a bit of texture. 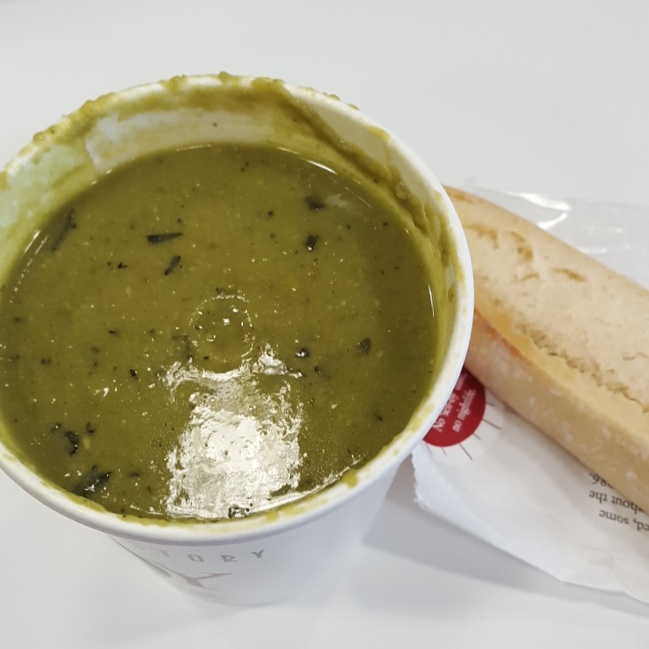 On Tuesday evening my Husband made me a lovely mushroom and leek risotto. I covered it in Violife’s parmesan style cheese so it’s not really recognisable in this picture!

On Wednesday two of my friends invited me for lunch at K Place, a Korean restaurant. I looked up reviews and there were some really good ones from Korean people living in London  so I thought it must be good! We had miso soup with pickles and kimchi to start and then I had bibimbap, which is assorted vegetables with rice and some tofu on the side. I have only had Korean food recently and I’ve been really enjoying it.

As I had the aquafaba from the chickpeas on Monday I wanted to use up I decided to use it in this omlette recipe from A Virtual Vegan. The texture was different to other vegan omlettes I’ve made before as this was the first one using aquafaba, I would say it was more pancake-like. I added a few herbs and spices to jazz it up a little and had a salad with it.

On Thursday I went swimming with Mum and she wasn’t in the mood to cook so we went to a Turkish restaurant near the swimming pool. I love Turkish food (if you weren’t already aware from previous posts!) and especially in summer it seems so much lighter than other cuisines. We shared some haricot beans in a tomato sauce and a stuffed artichoke to start. I’ve had the Pilaki beans before but the artichoke really stood out the veg inside were marinated in olive oil and dill, it was just such a nice dish. For main we both had imam bilyaldi – stuffed aubergine with rice and salad. This was a really nice example of this dish and it went down well with both of us! Turkish bread is also one of my favourites and I ate almost the entirety of our bowl (I did let Mum have a couple of pieces!) 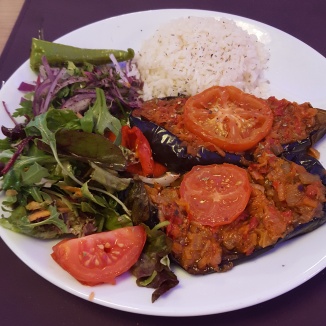 On Friday I went to lunch with a friend to Simple Health Kitchen, I had roasted veg and a Cesear salad (with vegan dressing!) with my huge sweet potato falafel and avocado & lime dressing. I liked the look of the raw chocolate, peanut butter cake but was really full so I decided to skip it.

On Friday we came down to my in-laws’ in Kent, I had this simple supper of sausages, spud and beans made by my Father-in-law.

There is an independent health food shop in the town which I have visited once before. Your Good Health sells a variety of foods and toiletries and will order in items on request. I bought these Salt & Pamper Epsom salts so I could leave them at my in-laws’ for when I visit. I really like this Amy’s split pea soup which is really filling. I got some More Than Meat burgers to have in the freezer at my in-laws’ (you can see my review on the full range here). I hadn’t tried the Booja Booja ginger ice cream so I decided to pick some up. I’ve had a spoonful out of the tub and it doesn’t disappoint! Lastly I bought teapigs matcha drink which is apple juice with concentrated green tea to give you a boost.

On Saturday I had a nut burger with chips and salad before I settled down to watch Eurovision!

My Husband has been craving Japanese this week so we decided to stop at Yo! Sushi at Victoria station when we were travelling through. Be sure to ask for the vegan menu for a long list of suitable goodies! I had the inari tofu sushi, seaweed salad, aubergine, vegetable dumplings and sweet potato in panko breadcrumbs.

I went for the apple dumplings with miso caramel sauce. These were gorgeous and I think I’m going to try and recreate the sauce at home!

As is the custom at my office we have to bring in food for every and any reason (!) so I’m taking in scones tomorrow with coconut cream and raspberry jam for my veganniversary.

They usually go down pretty well!

Have a lovely week!