Bit late on the round up, I have had a very busy weekend and yesterday I just wanted my bed when I got home!

Last weekend I made some almond feta and defrosted some cashew cheese I had made from the freezer and took them to work on Monday for my colleagues to try along with some French Herb Gozo Casheese I had bought. They went down well with everyone and many commented that they tasted a lot better than they expected vegan cheese to taste!

I also made some mini quiches but the pastry wasn’t cooked enough to take into work but they were ok for me! I had some for dinner with the last scrapes of cheese that were left.

On Tuesday I had some more quiche with roast potatoes and veg. 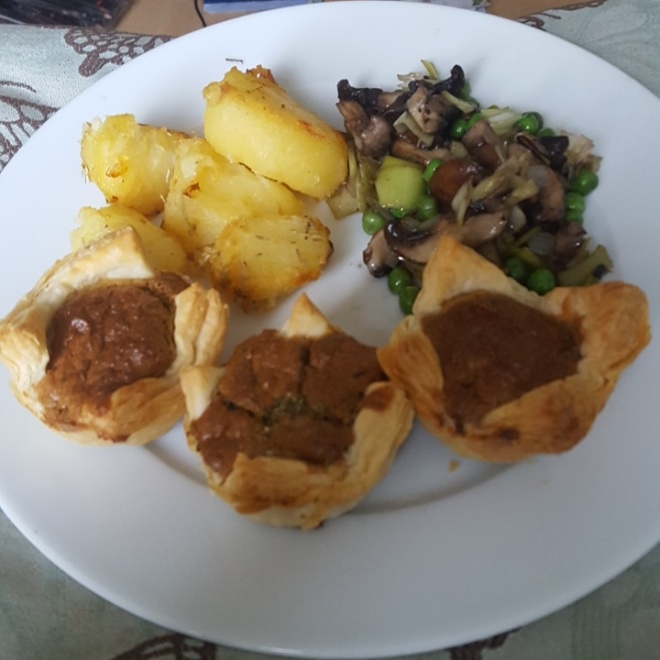 I had been feeling a little heady in the week and on Weds and Thurs I just wanted bland carbs, on Weds I had spring rolls and plain noodles and Thurs I just had chips. I know the height of vegan cuisine! Neither particularly photo worthy but they really hit the spot!

On Friday I stayed over my Mum’s house as we were heading to my Cousin’s wedding early on Saturday morning. She defrosted some black bean, quinoa and coconut stew she had in the freezer. It was delicious and something really different.

On Saturday I was honoured to give a reading at my Cousin’s wedding. They had a lovely church service followed by a reception hosted at Barnsgate Manor. My Cousin and his Wife (!) are always very accommodating to my dietary needs and their wedding day was no exception. One of the staff came and spoke to me before each course to explain what I was having and what items were vegan friendly. For starters everyone had a fruit platter, I had quite a bit of other people’s too! For main I had a stuffed squash which was one of the best mains I’ve had in a non-vegan environment! My Cousin and his Wife are fond of a cream tea so they served scones for dessert, I had my own plain and fruit scones with jam, they were so good I wolfed them down before I got a chance to take a photo!

When we got home on Sunday I was really tired so decided to go in to town for lunch. We went to Zizzi’s, and unfortunately my battery had run out on my phone so I had to use my Husband’s which doesn’t have the best camera on it! I went for olives to start and then the vegan pizza with olives, mushrooms and roasted red onions. I was pleased again with the pizza. I went for the nectarines with coconut and mango swirl ice cream for dessert. The nectarines are described as caramelised on the menu  so I expected them to be warm but they were almost frozen solid and I struggled to get my spoon through them to cut them. The ice cream was nice but I don’t think I would order it again. Has anyone else tried this dessert? I don’t know if was served as it was supposed to be or whether I just got a dodgy one! I was disappointed they didn’t serve dairy-free milk as I really fancied an Earl Grey tea. I would think that a restaurant with a vegan menu would have a vegan milk option! I raised my disappointment with them on Twitter and they responded it is something they are currently looking into as they have had many enquiries for it. Hopefully it won’t be too long! 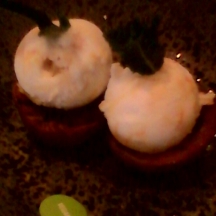