I hadn’t been to The Gallery Cafe in Bethnal Green for a number of years after an incident with a frozen hash brown, but I thought enough time had passed for me to try it again – sadly I was disappointed.

I ordered the vegan nut roast, a soya matcha latte and a piece of carrot cake. After queuing and paying I returned to our table. I looked at my receipt and I had been charged £9.95 for my nut roast when the menu board stated it was £8.50. I went back up to the till to rectify the error, the server said it was the board that was wrong but gave me the difference back and then corrected the displayed price.

I sat down with my matcha latte and after a few sips I thought it tasted a bit funny. I took it back up to the counter to make sure it had soya milk in it. The barista apologised profusely as she had put dairy milk in it and made me a fresh one. The other server told her that matcha lattes always have soya milk but apparently she didn’t know. When I sat down with my correct drink it was lovely. If matcha latte is available I will always choose it! 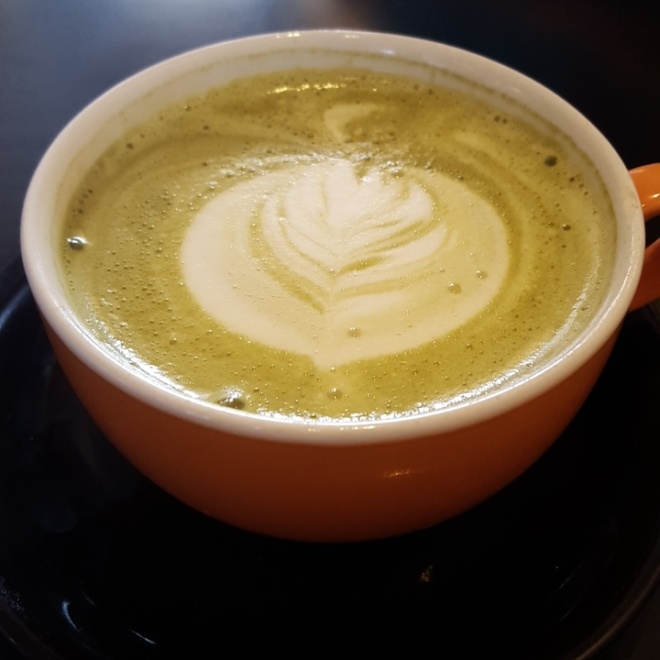 My mum went for the Ethiopian stew, which had chickpeas, peanuts, apricots, raisins and vegetables. It was served with brown rice, vegan yogurt and salad. I had a little taste and it was really good.

I appreciate food can come out at different times but my Mum was on her last bite when my nut roast made an appearance. So effectively I watched her eat and then she watched me eat! The serving of nut roast was huge and had a crunchy crust on it. It was a bit difficult to get into but I think that was more due to a blunt knife than the nut roast itself. The roasted new potatoes were crisp and peppery. I enjoyed the asparagus and the greenest but unfortunately the runner beans were very stringy and practically inedible. The other issue I had was as the meal had been served in a dish rather than on a plate I round it difficult to cut up the food.

Lastly, the carrot cake! I was given this when I paid at the till and it had been sitting on the side of my table looking at me for a long time by the time I got to eat it! It was lovely and moist and the frosting was tangy and sweet. The only negative was that it wasn’t as spicy as I would expect but it was still a lovely cake.

The cafe was packed, so it’s obviously very popular. Have I just been unlucky with my food the couple of times I have been here? I went with my Mum both times and she didn’t have an issues!

Have you been to the Gallery Cafe? What did you think?

One thought on “Review – The Gallery Cafe”