Last night I had my monthly dinner date with my friend Jo. As I wanted to continue my tour of East London I suggested we try out Just FaB on Hackney Road.

Just FaB serves all vegan Sicilian street food out of a converted double decker bus. It is the brain child of Fabio Pironti and his mamma Myra, a vegan of 20 years, who moved over from Sicily to create the menu.

They have a wide space outside with table and chairs (and even table football!) but as the sun was going down and it was getting a bit chilly we decided to eat on the top deck. (You kind of have to, don’t you?) 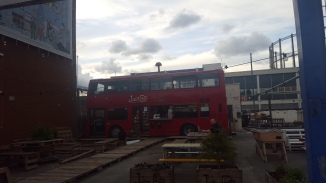 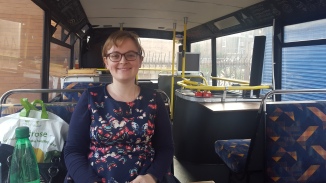 Jo went for olives to start, she said they were well marinated and really spicy. I had arancini. They were crunchy on the outside and lovely and oozy with vegan cheese in the middle. I would have to say these are the best arancini I have ever had!

For mains Jo had the falafel and houmous. She really enjoyed it and said she thought it looked better than some of the dishes on the website so they should put this dish on there!

I went for the lasagna, I went for the xl size as I wasn’t having a side with it. It was layered with pasta spinach and cheese sauce with a tomato and I think soya (it could have been seitan) sauce on top and sprinkled with nutritional yeast. It was so good and a little unconventional from what I expect a lasagna to be like.

Jo was stuffed and only managed an Earl Grey for dessert. I had ordered the vegan tiramisu with the rest of my food as I had heard so much about it! It was really light and creamy and the coffee wasn’t overpowering. I’m not sure what the cream was made from as there wasn’t an aftertaste of soy or coconut. Jo tried a bit of the cream and said she couldn’t tell the difference from dairy cream. It was gorgeous and I didn’t feel weighed down as you can do sometimes from puddings!

I would recommend Just FaB and think it would be great to go with a large group and completely take over the top deck!

Service from Fabio was great and he really appreciated our feedback.

Have you eaten at Just FaB? what did you think?