Yesterday I went spent the day out in Brighton with my cousin Katy. Technically I think we’re second cousins once removed. (Our Mums are first cousins and our Nans are sisters). I’m six years older than her and have always seen her as a little sister, especially as she is the eldest out of her first cousins. We haven’t seen a lot of eachother lately due to life getting in the way so it was lovely to spend the whole day with her doing fun things!

I started my day at my cousins’ Dan and Amanda’s house. They are always very accommodating and have dairy free milk in for me (and usually vegan cider!) I was impressed with my own vegan detection skills in the shower when I randomly picked out a vegan shower gel from their extensive range! I’m not sure where this one is from, I think it might be Superdrug. It was white chocolate based and smelled amazing!

I met Katy at Eastbourne station. I saw a cafe I hadn’t noticed before inside the station so decided to grab a coffee while I was waiting. I’ve found independent cafes in Eastbourne lacking in dairy-free milks in the past but I was pleasantly surprised that Bella’s Secret offered both soya and almond milk. I went for a soya chain latte and thoroughly enjoyed it!

The weather wasn’t fantastic and it was a bit showery on the train ride over so we decided our first stop had to be a cafe for a hot drink. I wanted to try Black Mocha as I had met some friends there last time I was in Brighton but they had sold our of vegan cakes. We had a vegan snickers and an orange, raspberry and pistachio cashew cake with two of the signature black mochas. The snickers cake was really rich and sticky; I think it was a good idea to share both cakes as the pistachio one was really fresh and cut through the richness of the other. The coffee was quite strong but with the sweetness of the chocolate in it I didn’t need any extra sugar.

We then had a look around the shops in the North Laine area. I picked up some sausages from Brighton Sausage Co. It’s a bit of an odd place to be selling vegan sausages but if you head in the door (try not to look at the meat counter!) there’s a fridge on the left that houses the animal friendly ones. There was only one packet left and the guy working in there said they had two deliveries a week and often sell out within 20 minutes!

We had a look in a Chinese supermarket and I picked up some mock curry chicken, mock roasted duck and some red beancurd. I’ve never seen red beancurd before so I’m looking forward to trying it out.

I promised myself I wouldn’t spend a fortune in Infinity Foods but as we were thirsty we needed to pick up some drinks. I was blinkered again and tried not to get tempted so headed straight for the drinks cabinet. Katy got a Fentimans rose lemonade and I had their elderflower. I really like it as it’s not as sweet as some other elderflower drinks.

I picked up a lovely tea towel with a Highland Cow on it, but unfortunately I can’t remember the name of the shop. I also saw some lovely pictures and lampshades that I loved, but that will have to wait until I have enough space to put them in!

We had a great root around To be worn again. I tried on a couple of dresses which didn’t fit right. If I had a sewing machine (or space for a sewing machine!) and the skills I’m sure I could have done something with them, but they were a bit pricey to take a risk on. Katy found some stonewashed short dungarees that looked great on her so at least one of us left happy!

We headed to rootcandi for lunch. I had seen lots of photos on their instagram feed and from other vegans I follow who had been there. I’m going to write up a full review but here’s the pictures. We had a beetroot burger with courgette fries and a dhal with rice, naan and raita. It was all delish! 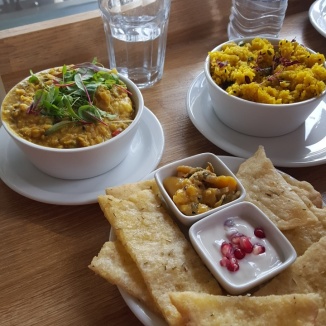 We skipped dessert as I had seen an ice-cream parlour offering vegan options and wanted to try it out. We usually go to Boho Gelato for our ice-cream needs but as we’ve been there multiple times we thought we’d give Gelato Gusto a try. Katy had blood orange and mojito which both tasted really fresh and citrusy. I went for lychee and rose and cherry cola. Lychee and rose are two of my fave flavours separately or together and this sorbet tasted really delicate. The cherry cola packed more of a punch so I tried to eat the scoops one at a time. Next time I think I’d try a blackcurrant and elderflower combo. They also had vegan brownies so it was nice to see multiple options.

Our last stop before rushing back to the station to catch our respective trains was to Pearls for some bubble tea. They had a sign saying the milk option were dairy and lactose free but not vegan. I enquiried and the lady serving said it contained an egg derivative. Not great but at least it was clearly labelled. I went for black lemon tea with half sweetness (as we’d just had the ice-cream) and tapioca pearls. Katy had lychee tea with strawberry pearls.

I always love a day trip to Brighton  but with so many vegan friendly places it’s a tough decision between trying something new or going with old favourites!

What are your favourite places in Brighton? Let me know in the comments!

3 thoughts on “A Day Trip Out in Brighton”